The Williams F1 team dropped in to see us at Lympstone Manor at the end of June on their way to The Goodwood Festival of Speed with a fleet of cars and racing legend, Damon Hill.

As a long-time partner of Williams Racing, Michael Caines welcomed the team to a signature event which marked the 40-year anniversary of the Formula One Williams Racing Team. The evening event was hosted by Damon Hill with a champagne reception and five-course dinner created by Michael along with a charity auction of Formula One memorabilia. The auction raised an incredible £15,000 for Down Syndrome International and the Down's Syndrome Association, of which Damon is patron.

Lympstone Manor was also opened up during the day, before the press event, to give the public the opportunity to experience three Williams Heritage Formula One cars, only usually seen on the track, in the stunning setting of the Exe estuary.

With this year's event such a success, Michael is hoping to bring it back next year, even bigger. 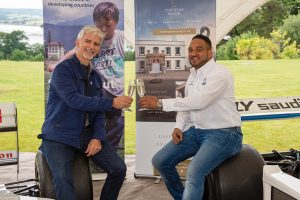